My stints at sailing have been admittedly few and far between. I loved learning to sail during Summer Camp on Lake Geneva. That feeling of freedom, of you and the wind. After that I remember taking out a Hobbie Cat during my honey-moon, going out on my father in law’s lovely motorboat on Lake Winnipesaukee, and going out on friend’s boats once in a while after that. But when a dear friend invited me to crew his sailing boat from Valencia to a Greek island, I jumped at the opportunity.

Spain was still easing out of the Coronavirus quarantine restrictions when I took the train to Valencia. The boat was not ready yet, so I spent a week in Valencia, visiting old friends -even an old student, who I was able to see at her Opera recital!, walking about and helping to get the boat ready for sailing. (See previous post) 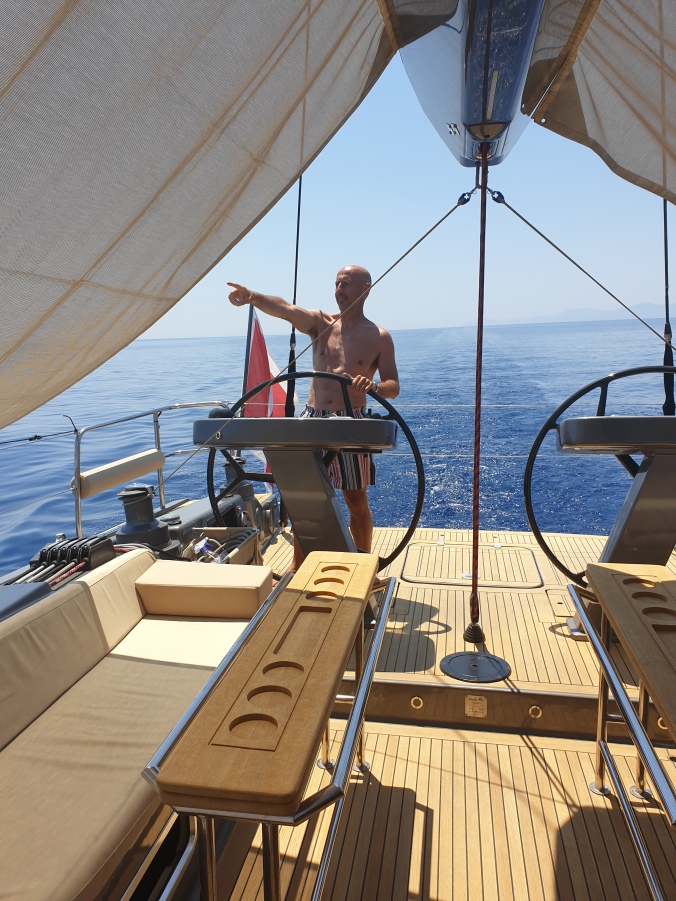 Finally, the boat was ready, Manolo our third man jumped abroad, and we sailed out. The crew was super nice Captain Jose, and Manuel, a good friend of his and a solid sailor, which left me as the lowest on the boat’s hierarchy. But those of you who know me know that I am a sucker for a challenge and always open to learning, specially if it is something as fascinating as sailing.

The boat is a 2006 20 mt German built Hanse that the owner has extensively tricked out. It is a beautiful combination of high-tech and old-world. Each of us gets our own en-suite berth. There is an island kitchen, big, flat screen TV, full bar, etc, etc, etc., oh and super-important: a state-of-the-art Nespresso machine!

Taking a break in Mallorca

We sailed out of Valencia on motor power since there was not enough wind to fill the sails. I was surprised to see Ibiza only a few ours out of Valencia. We sailed on, I got the 1:30 to 4:00 am watch, unexpectedly it passed by in a rush as I explored the gorgeous night sky, meditated, and of course did my watch duties: making sure we didn’t crash with anyone, keeping an eye out for icebergs and making use of that Nespresso machine.

I awoke as we approached my beloved and very familiar Mallorca. My heart filled with memories of my youth and family. (See previous posts about Mallorca). I waved bye-bye to my favorite island only to face a rough head wind on the crossing to Sardinia. We were under full sail, but we were slamming 3 mt waves with no prospect of stopping any time soon, so we did a 180 and headed back to the shelter of Mallorca. Our resourceful Captain wisely picked a cove right on the South-East corner of the island so we would be ready to head to Sardinia as soon as the wind changed direction. A little down-time from the buffeting wind was welcome, as was a first swim and a quiet dinner.

On course for the Messina Straight

The forecast did not change, so we stayed put another day. We hit the beach on an inflatable kayak which would rip a valve as we arrived on the beach. We stayed for a gorgeous local seafood stew lunch “Caldereta” plus a few cocktails to celebrate Manuel’s 50th birthday. The punctured kayak barely got us back to the boat! 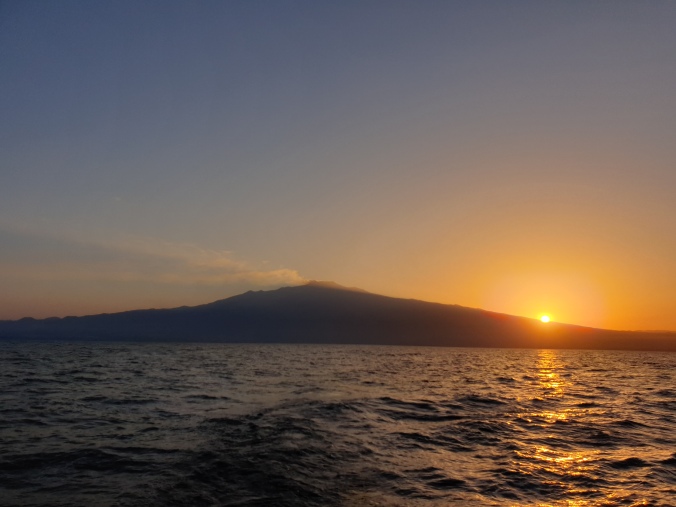 As beautiful as that cove was, we had to get moving. Instead of risking the continued headwinds on the crossing to Sardinia, we decided to go around the North of Sardinia where the winds were much friendlier.

We had nasty headwinds all the way to Sardinia so before crossing the treacherous -but beautiful north shore we stopped for the night in another gorgeous cove. We arrived too late for a swim, but we did enjoy a nice plate of spaghetti al pesto. 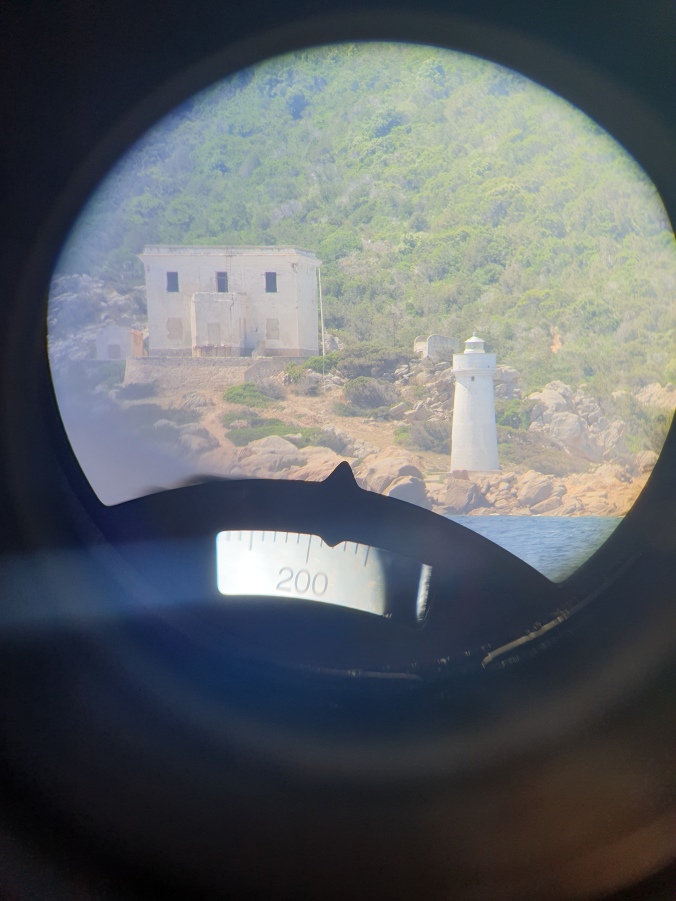 The next day we were running low on fuel, so we stopped to refuel and to rest before the long haul to Sicily. During the way I was allowed to steer for the first time. While re-fueling I managed to run ashore to throw out the trash and to the supermarket where I purchased some overpriced ice, bananas, oranges, and strawberries.

The ice was critical for our sunset chill-out sessions where the crew (not the captain) would enjoy a gin-tonic listening to some nice tunes while enjoying the sunset.

Every sunset is beautiful

From there we continued sailing for a couple of days to the narrow straight of Messina that separates mainland Italy from Sicily. Coming out of that channel we were welcomed by a great aft wind that pushed us nicely to Riposto, right under smoking Etna volcano! The nice marina folks allowed us to park for a couple of hours after refueling so we could do some grocery shopping. We passed by the pretty and well-balanced town square with its church and town hall, we did our grocery shopping and still had time for a quick cup of espresso before boarding. I had not been to Italy since 2004, so that brief stop was wonderful, and the cup of coffee one of the best I can remember (see previous post). 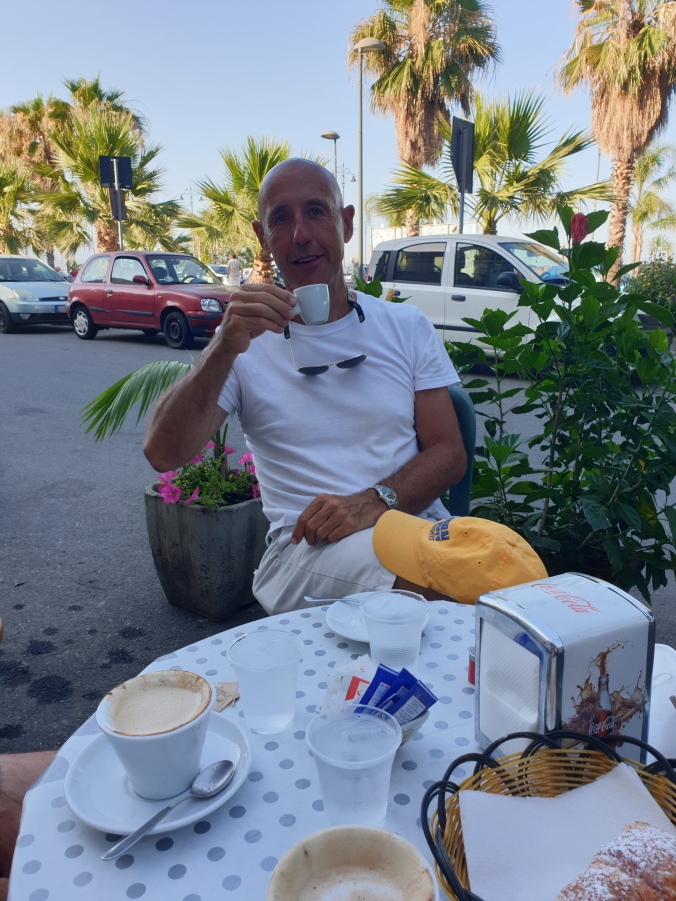 The full coffee experience in Sicily

From there it was a straight shot to Greece, where our first stop was Methoni with its Medieval, then Venetian, then Ottoman, then on and on octagonal tower. My dear friend Miguel de Cervantes was held captive there after being captured after the Battle of Lepanto and before being taken to Algiers where he would spend a total of five years.

The Venetian-Ottoman tower in Methoni

From there we sailed around the Peloponnese stopping again at the amazing isthmus at Simos beach on Elafonisos. Our final day was an easy sail to the charming island of Spetses.

Isola Molara off the coast of Cerdegna

Although I started this adventure quite worried about my lack of “real” sailing skills, my colleagues were patient and amazing, teaching me everything they could about this beautiful craft and art that is sailing. So by journey’s end I was participating actively on all maneuvers!

During my pilgrimages on the Camino de Santiago (see previous posts) I have learnt that spending over ten days outdoors in nature naturally resents your mind and soul. This was no different, if anything it was even better as there are fewer distractions on the ocean: just the sound of the wind, the horizon, the stars at night, even dolphins came to swim with us for a while! It was an experience like no other I have ever had, and I hope to do it again soon. Now that it is over, I miss the camaraderie of the boat, the constant reading of the wind, even the night watches!

PS: If you are a sailing aficionado our trip from Valencia to Spetses was about 1300 Nautical miles, about 1500 land miles and about 2400 km…

The best coffee I’ve had in a while

The texture of carbon fiber sails

Isola Molara off the coast of Cerdegna 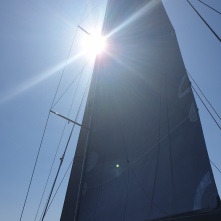 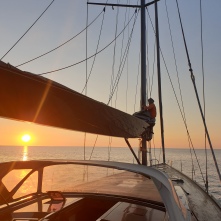 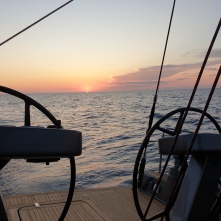 Arriving to the Balearics