By midday it warmed up, also, I was hustling 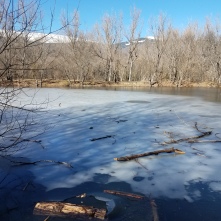 It was nippy enough for frozen ponds

Meditating in the cloister 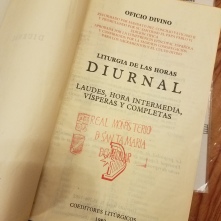 One of the many books used for prayer

There are 52 Carducho’s around the cloister 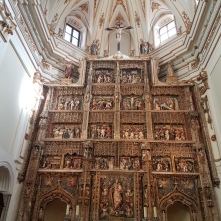 Enjoy the gorgeous Baroque altar in contrast with the Rococo ceiling. 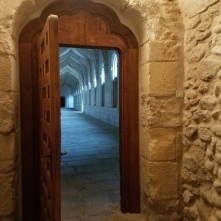 Entry into to cloister

Simple window blinds in the cell 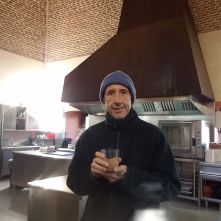 Stealing a warm cup of café con leche in the kitchen 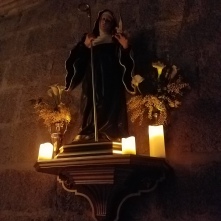 Saint Scholastica sister of the founder of the Benedictine order 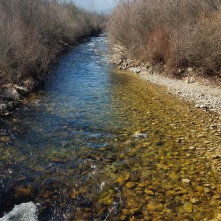 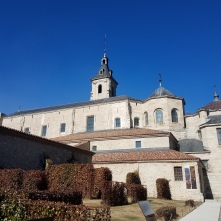 Entering the refectory (dining room) (yes, it is a tiny door) 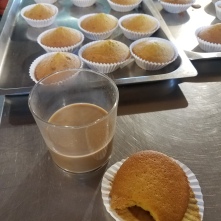 The monks made Madeleines!

The Abbot (front) with a couple of monks

Gardening in the cloister 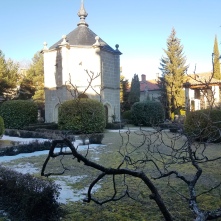 The cloister in the chilly morning 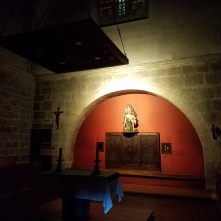 The intimate and simple chapel

Medieval bridge outside the monastery 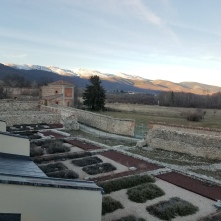 View from my cell

The last few months have been a bit challenging, so when the opportunity came to spend a few days in the Monasterio de El Paular in a retreat of silence and meditation, I jumped.

I have written before about El Paular, it’s magic and the wonderful monks since I have visited every summer for a few years,  But I had never spent more than a couple of hours there. Since I returned to Spain in the Fall, I called the monk in charge of retreats, the Guest Master, but could never find the right timing. Finally I chose a weekend with no other people staying over, and headed for the mountains…

Although the monastery is less than two hours away from Madrid, it feels a world away, as one has to go up the Guadarrama mountains (that would be where Hemingway based his For Whom the Bell Tolls) and down the other side. When I went, the mountains were all snowed, fortunately the road was clear, so I did enjoy a good drive up and down.

Once you enter the Monastery you notice your blood pressure drops and your serenity reaches levels you did not know were possible. You get a simple cell with a bed, a desk, a proper bathroom and amazing views of the mountains. I was free until vísperas (vespers) at 8pm so I went for a walk. My first steps of that walk where a rush, a tsunami of peace. In fact, it took a while to accept the silence as a companion.

As I mentioned in my posts about the Camino de Santiago, Medieval folk had a real spiritual affinity for choosing where to put churches, chapels or monasteries. This one is flanked by a gorgeous river and many streams which were running full during my visit. It is also at the base of the mountain, making it a very secure location. According to Feng Shui, if you were to draw a dragon using the available landscape, the best – and safest – place to build would be where the dragon’s genitals would be, that is where El Paular sits.

As advised by the Guest Master, I arrived early for Vísperas prayer. All 5 (6 when there is mass) daily prayers take place in a very cozy square chapel off of the cloister. The prayer breaks down into singing and speaking and into Latin and Spanish, but that really does not matter, as what matters is the repetition of the prayers that make the event magical.

Dinner comes right after vespers and happens in silence. A monk serves you and you eat while another monk reads a religious text. After special meals, the Abbot rings a little bell and you are allowed to speak, but not to get up from the table!

The final prayer, Completas (Compline) is a at ten, and you must keep silence until after Maitines (Maitins) at 6:30am the next day. You pray Laudes at 8am and have breakfast right after. Then the monks might have communal work. When I was there we had to clean up the monk’s tombs in the cloister and plant pansies that would withstand the cold. It was nippy out in the cloister, but the sun was shining and soon warmed us up. The work was rewarding as Abbot Miguel regaled us with stories of the dead monks and other folks buried there: an American fellow who was very fond of the monastery, or a child who drowned nearby, all very touching. After our work we snuck into to kitchen for a hot cup of coffee and madeleines made by the monks. I still had time for a walk in the forest before Sexta (Sext) and lunch.

And so the hours and the days pass: meditating, walking, eating in silence and praying. The weekend I was there the monks were celebrating Saint Scholastica, the sister of the founder of the Benedictine order. I had never heard of her, but her motto is very moving, something like whoever loves more has more power (más puede quien más ama) which became one of the cornerstones of my meditation while at the monastery. Once it got dark I would walk around and around the magnificent cloister which is surrounded by massive Vicente Carducho paintings (I think I will devote a blog post just for that bit…).

It is difficult to explain the monastic experience. The concept of time is totally different from that in the outside world, actually, outside might be the key word there as in the monastery it is all about inside you, your inner beauty, your inner holiness, your inner time, your inner everything!

On my last day I had a nice chat in the library with one of the senior monks. His advice to me? Empty yourself, a process the ancient Greeks called kenosis and something I have been working on since it was also recommended by Richard Rohr in his daily meditations.

Leaving the monks and the monastery was very sad, entering back into the crazy world we have created was tough, but I know I will be back to spend some of that special time with the monks at El Paular.