One always makes new friends on the Camino

One of the many ferries that cross the “rias”

The pretty town of Luarca in Asturias

Casa de indianos built by villagers that got rich in America

Gaudí did not only work in Barcelona – El Capricho in Comillas 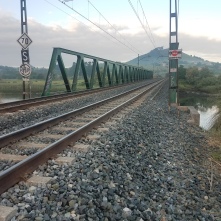 A dark spot on the Camino, crossing this RR bridge

I am a sucker for Romanesque architecture! 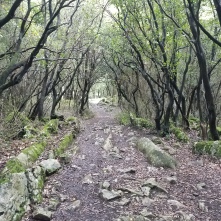 What the Japanese would call a “Forest bath” 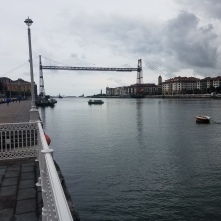 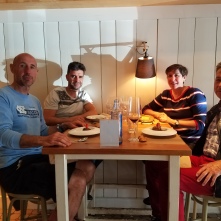 Awesome catching up with old friends in Bilbao 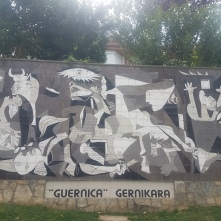 Time for a little coffee in France 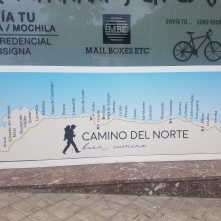 People start the Camino de Santiago for all sorts of reasons: adventure, self-improvement, fitness, spending time with their partners or friends, personal growth, finding oneself, etc. Upon finishing my third Camino, I have found that my main reason is a spiritual one – which by the way was the original purpose of the pilgrimage.

This year I did the Camino del Norte which  “officially” starts on the Spanish border with France at Irún. I crossed the Bidasoa river that separates the two countries, had a coffee in France, got my first stamp on my Credencial (the pilgrim’s “passport” that gets stamped along the way) and so got my official start in France, how is that for one-upmanship? or just for snobbery! This Camino then goes all along the North shore of Spain until turning in at Ribadeo to finish at Santiago.

Technically this is the second oldest Camino. When European Christians first started going to visit the tomb of the Apostol James in Santiago they either took a boat to one of the nearby ports in Galicia or to Oviedo and then cut inland to Santiago – that is the Camino Primitivo. Then came the coastal route, and when the Moors had been pushed South enough, pilgrims started going along the interior of the country on much easier terrain than the constant hills of the coast, this would become the Camino Francés, the most popular and most long-lasting Camino.

Now, before I continue let me point out that specially the Camino del Norte is a bit of a scam. You see, the Camino really was abandoned in the XX Century. In 1978 there were only three recorded pilgrims arriving in Santiago. Then in the ’90s it came back into fashion with younger people going on this route of self discovery. With increased popularity regional governments needed to re-mark and really re-establish the Camino. For the northern route this was difficult since the medieval paths that would unite villages along the valleys were now taken over by roads, so especially the Basque and Cantabria governments reinvented the Camino as a hiking route over hills and mountains where medieval pilgrims would never have set foot as they would have been eaten by wolves, bears and/or assaulted by bandits!

My Camino was glorious. The first day it crests a long mountain with amazing views of the sea and of the valley inland, finishing in San Sebastian, one of Spain’s prettiest towns and with the best food in the world. The second day it rained, and on a difficult descent, with wet socks I hurt both of my big toenails. This would be a bit of an issue for the rest of the Camino, but you do need some suffering in order to fully enjoy the Camino!

The Camino del Norte is known for it’s beauty. You walk between gorgeous beaches to verdant valleys day in and day out, through postcard perfect villages and some of the prettiest cities in Spain: San Sebastian, Bilbao, Santander, Gijón… The down side, if it can be called that, is that there is little variety as compared to the Camino Francés which changes topography constantly from the wooded hills of Navarra to the dry tableau of Palencia. The Camino del Norte also lacks the spiritual “weight” of the Francés with it’s open churches, pilgrim’s masses, etc.