The San Silvestre Vellecana race has been going every New Year’s eve since 1964 – that’s one year before I was born! I ran it in 2015 with my cousin and again a few days ago. It is not the oldest race, longest or anything like that, but it might be the funnest.

Then I forgot about it until I started training again after my motorcycle accident in 2017 – when I promised myself I would run the San Silvestre again.

The recovery from the shattered pelvis was very slow and painful, but I slowly added the miles, finally running 10 kms in training at the Retiro Park when I got back to Madrid in the fall. I am happy with the results which, while not impressive, are ok. I ran a 1:06 with a 6:39 pace which put me in the middle of the pack finishing in position 20.872. Keep in mind that there were 42.000 of us, so there was a lot of traffic slowing things down. In fact as the crowd thinned I was able to speed up!

According to Wikipedia, this 10K race is based upon the Saint Silvester Road Race, a Brazilian race (held since 1925) which spawned numerous other New Year’s Eve races. It starts at the Real Madrid Santiago Bernabeu Stadium and finishes at the Rayo Vallecano Stadium, across town. Along the way it passes right by my mom’s house, so every year -even when I’m not racing, we take a walk to check it out. The Pro race held after us amateurs is a thing of beauty as those folks blister the streets in 26 odd minutes. Maybe next year…

That’s me giving my sister the thumb’s up after she missed me passing by!!

The atmosphere is awesome!

With my friend Rosi 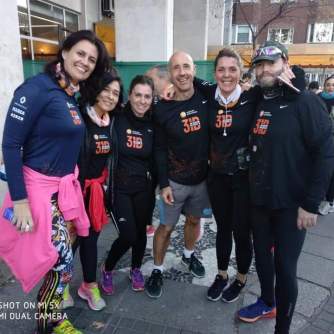 A few years ago we wore orange shirts 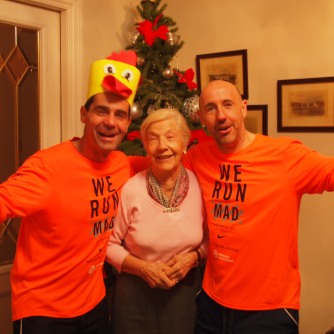 My mom wishing my cousin and I good luck in ’15 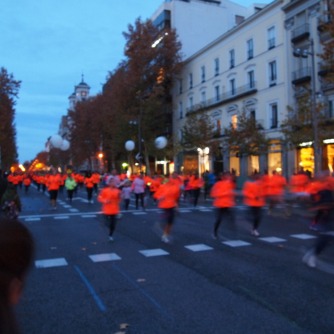 High fiving all around 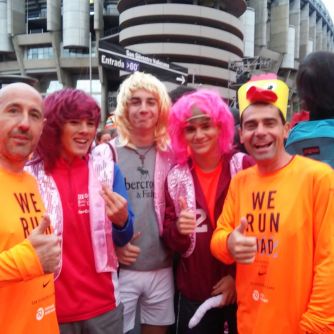