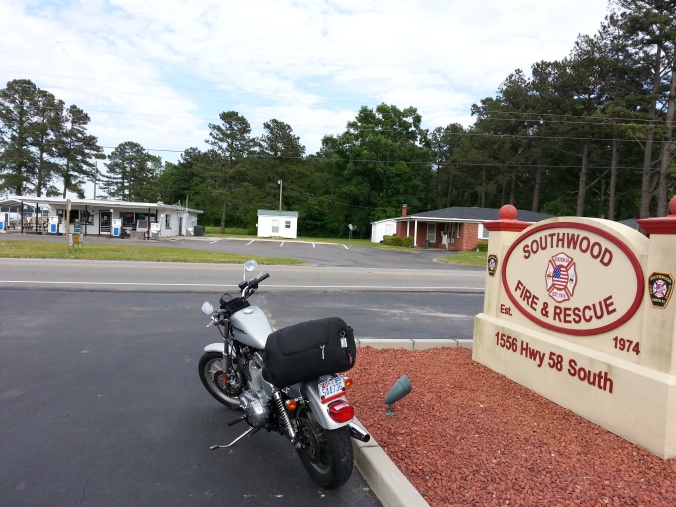 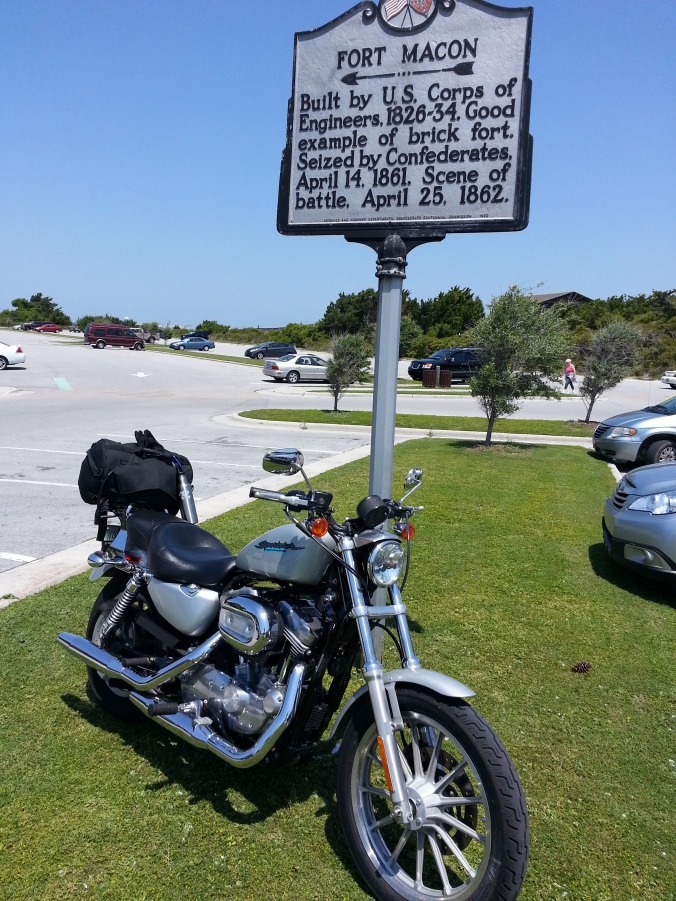 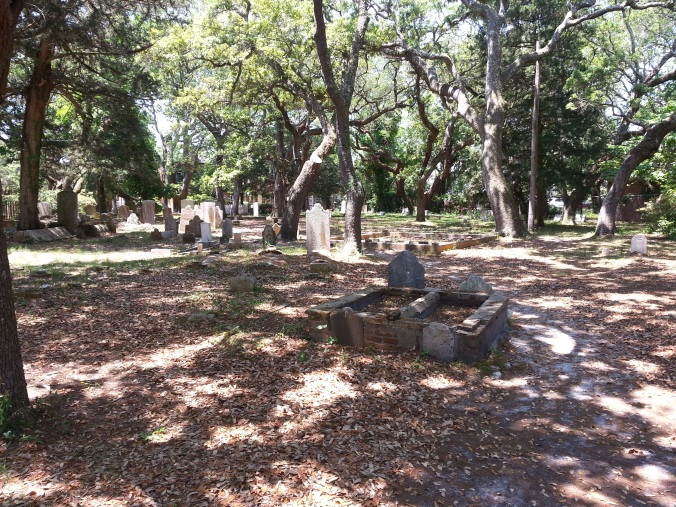 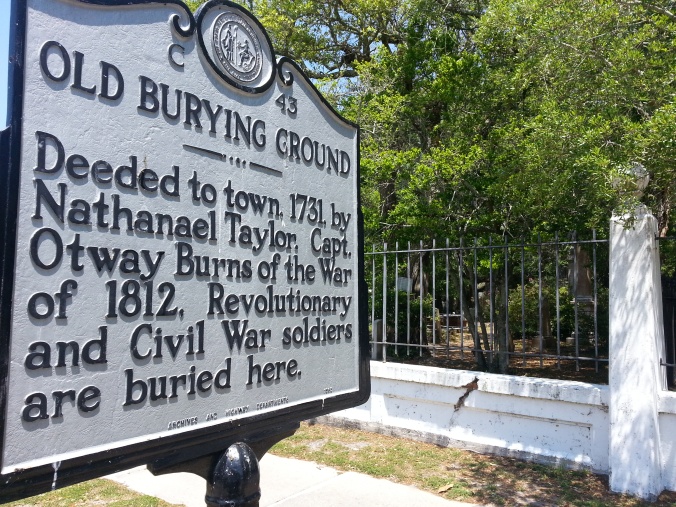 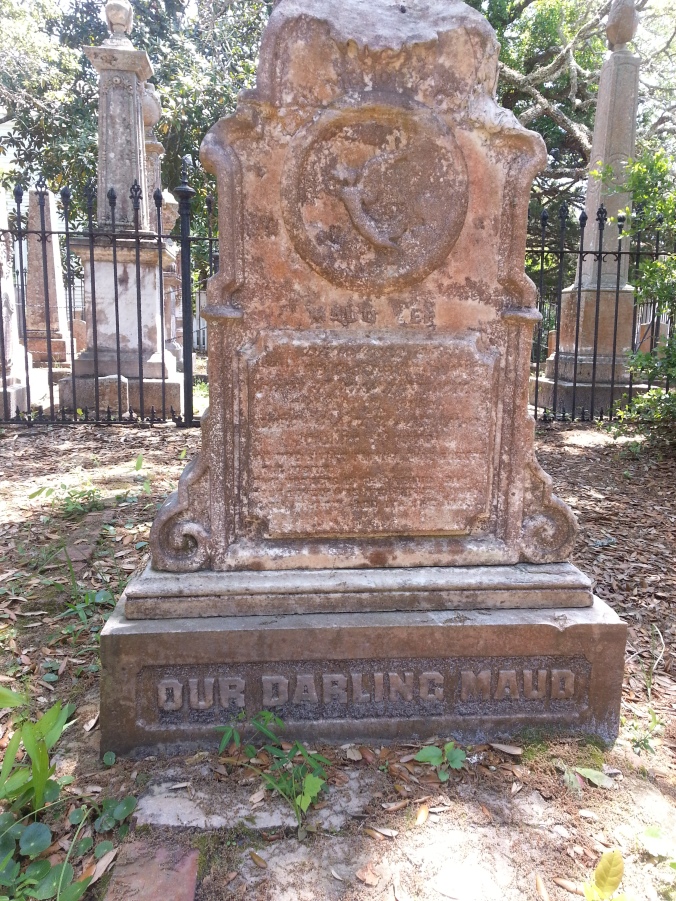 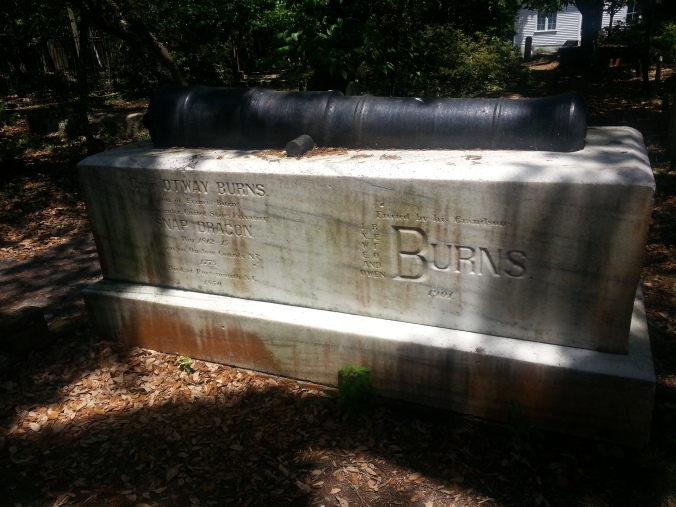 Notice the glove quickly melting on the exhaust! 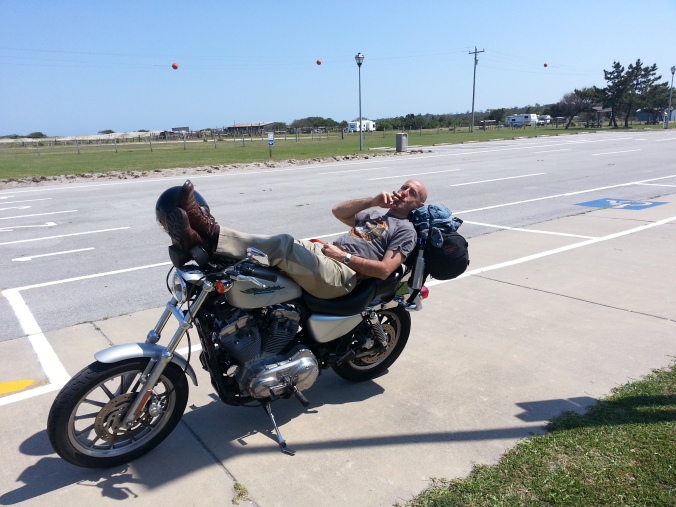 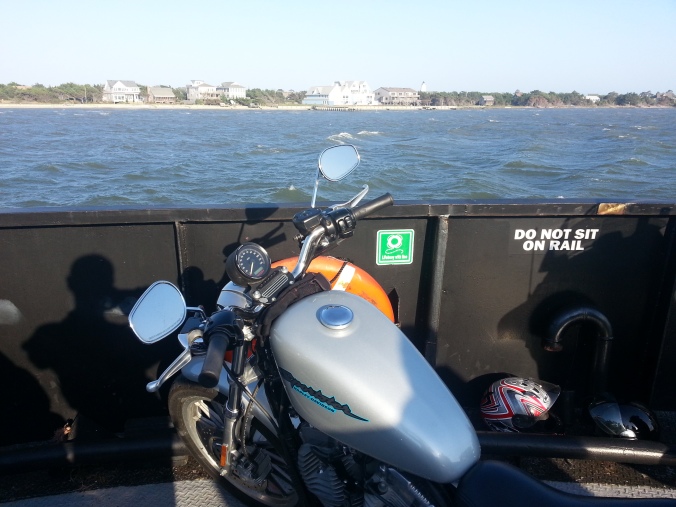 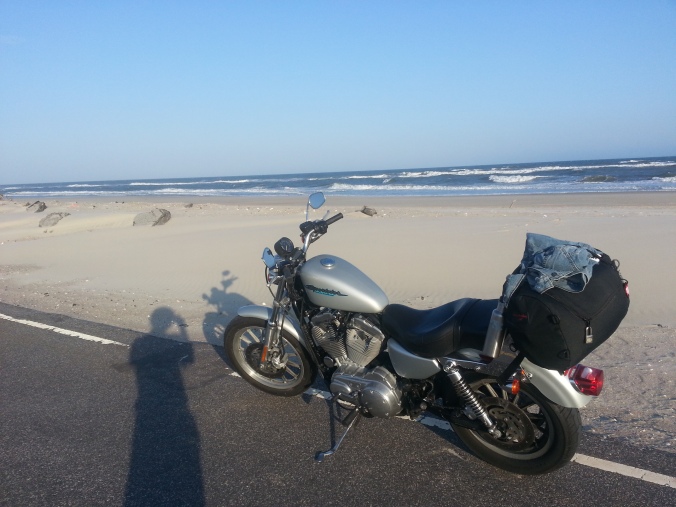 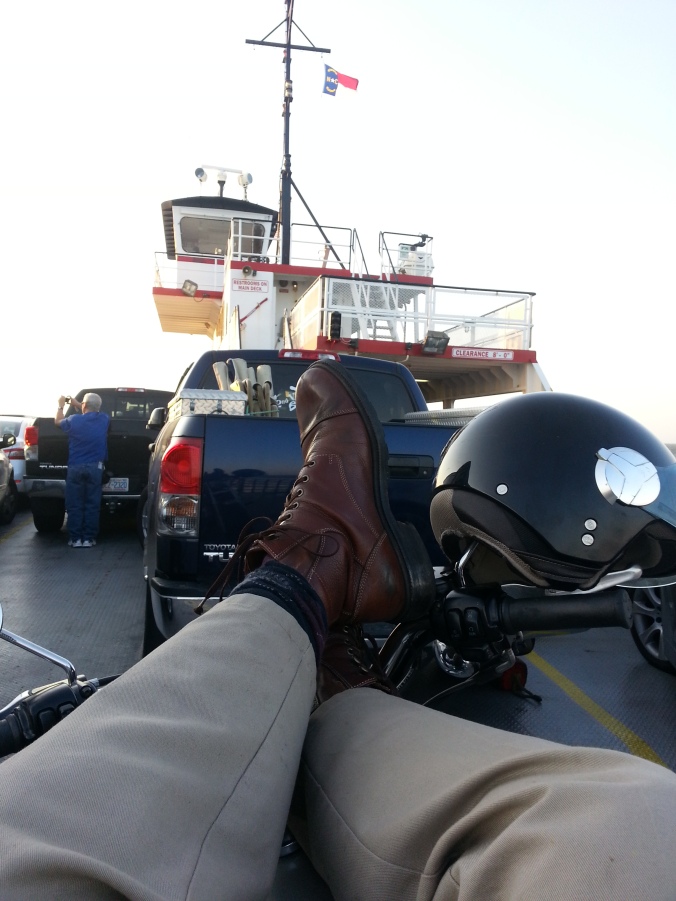 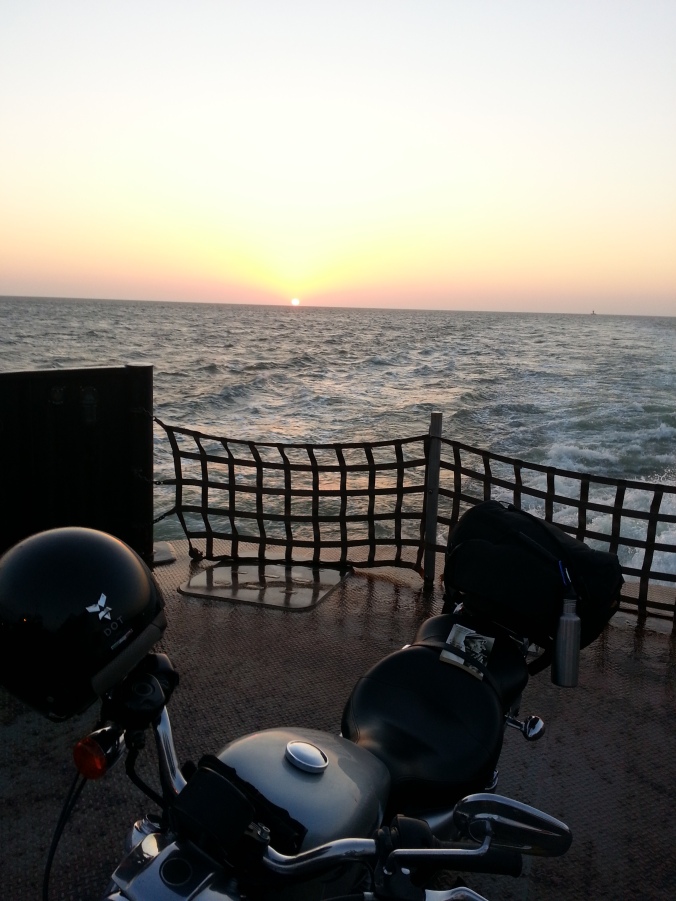 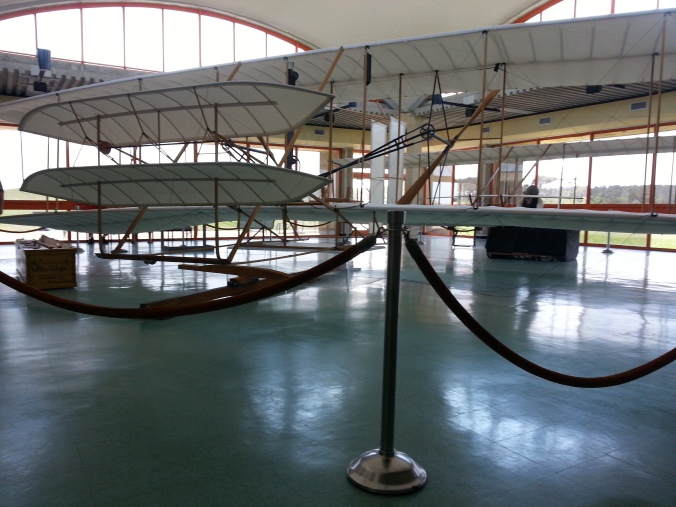 After a grueling end of the semester and academic year, Rocinante and I needed a cleansing walkabout. So hit the road! Tuesday May 14 after a great meeting with my thesis director and packing up, I headed East. Getting out of the Triangle (the area composed by Raleigh, Durham and Chapel Hill) is unpleasant because of all the “urban” traffic – at least by North Carolina standards. But we soon cleared Raleigh and were on our way on secondary roads. I was wearing a long sleeve T-shirt, but the temperature was just low for only that. A light windbreaker I brought along for it’s space and weight saving proved useless as it bubbled up and flapped like an amateur’s sail on a boat, so I was cursing my wardrobe choice when lo and behold I passed a Harley dealership, which was part of a huge outlet mall in Smithfield, where Ava Gardner was born! Fortunately I could buy nothing in the outlets as there is no space on Rocinante’s back pack! With a graduate student’s budget and not needing a full jacket, I found a cheap, and unfortunately hideous denim jacket, that was exactly what I needed. While I was there I picked up a pair of gloves since both pairs I was carrying were old and broken. Thus, I resumed my ride in comfort and warmth!

As I neared the shore, the roads became smaller and smaller and the ride more and more beautiful, passing tiny towns like Kinston, birthplace of legendary sax player Maceo Parker. A beautiful ride through CroatanNational Forest marked the end of my ride as I crossed the Intracoastal Waterway into Emerald Isle where my old student and friend Anastasia Papanicolaou was waiting to take me to dinner. And what a dinner it was, fresh, fresh seafood at The Crab Shack. It was great to catch up and share a good laugh with Anastasia. She recommended a great Greek owned place for breakfast, and it was spot on! After a veggie omelet and delicious French toast I enjoyed a leisurely ride up to Fort Macon, a beautifully restored, tiny Civil War fort. Back on the mainland is gorgeous Beaufort, apart from a cute downtown, it has an alluring Neo-Gothic burial ground with all sorts of curious tombstones, it was a fascinating visit. A superb ride through Carteret island? peninsula? through the Cedar Island National Wildlife Refuge led me to Cedar Point. There is little in Cedar Point: a nice wooden sign (see photo), a convenience store, a post office and the ferry terminal. Since last Wednesday it also has my sunglasses which I must have dropped while taking a photo, actually a photo of Rocinante’s exhaust burning a hole through one of my brand new gloves that slid from the seat! At any rate, after a bad burrito from the convenience store I at least enjoyed a cigar waiting for the ferry to Ocracoke Island.

Waiting in line four other bikers showed up, and as is usual, we soon hit it off and became fast friends. Dr. Thomas Ritter Von Spalter was great! He got his PhD in German Lit in the 70s, taught high school for years and now works for the PA State Police, he is a member of the Blue Knights (the police bike club) and rides a 105 anniversary Electra Glide which he calls the “Duracell battery” for the two tone paint job, he went to school with Pele! We had a great chat and he is a great fellow.

Rocinante was excited for her first boat ride, and it did not disappoint. It was a sunny two and a half hour crossing into the cute village of Ocracoke, a 14 mile stretch of road with beach on either side led to… another ferry. This time a half hour ride into Hatteras. The ferry personnel saw me in line and found a spot for me, last one on board. The ride included a beautiful sunset, which also made the crossing a bit chilly. We arrived at Hatteras at night. I found a cheap room at the Breakwater, but my room was not made, so they upgraded me to a great room for the same price. They also have a great restaurant where I had a delicious seafood dinner.

Thursday was a beautiful ride all the way up the Outer Banks, miles and miles of great sunshine and beaches. The last highlight of the ride was stopping at Kitty Hawk for the Wright brothers memorial. What a great stop! I saw the place of the first real flight, a great explanation of that flight by a park ranger and I climbed the hill to where the brothers practiced with gliders. It was a very exciting experience. From there it was a beautiful, long, and sad trip back home to Chapel Hill.

The beauty of motorcycle riding is how each mile peels off a layer of accumulated “crud”, it cleanses you like a facial scrub. I know I have said this before, but it is just you and the bike, the engine drone, no radio, no music, no climate control, no cup holders, no snacks. You have to be alert and in the moment, looking down the road to see any changing conditions, scanning ahead at the sides of the road for whatever, concentrating on the turns, it requires total focus which means you cannot be thinking about too much else – without crashing. So it is a bit of a purge, each mile adds perspective, relativizes everything. As I write this it has been raining in Chapel Hill for the last three days and Rocinante is here next to me in my living room, a quiet companion who understands, and who has been there with me every moment.

One thought on “End of year excursion!”