Firing up the barbecue

Catching up on the sports (football) news

Enjoying a coffee with my god-daughter 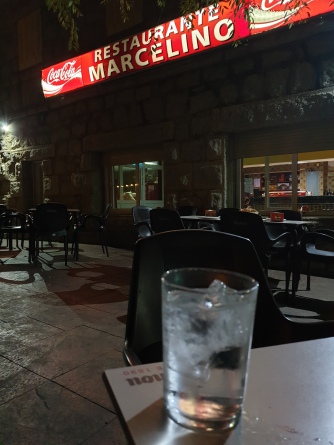 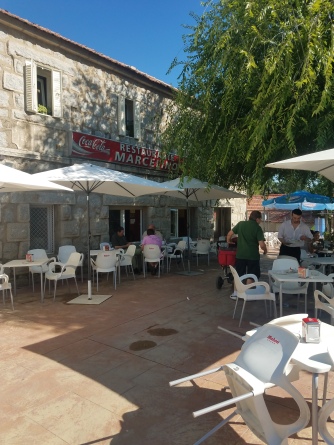 Checking out the Sunday papers with the kids

My coffee companion most mornings

My mother has a country house in a tiny village near the mountains of Guadarrama, North of Madrid. We have been coming here for weekends and Summer since I was a child. The village has a train station, a small river, a supermarket, a church, a pharmacy, a convenience store, a couple of restaurants, and a hair dresser, but the most important place in the village is the café/bar/restaurant: Marcelino.

Marcelino sits near the Guadarrama river by the road to a bigger village a few miles down. It was built by the grandparents of the current owners stone by stone in the early 20th C. Since then it is the central meeting point of the village. It is the place where I had my first drink in the smoke-filled bar in the early 80s, and the place where I enjoy a coffee every day during Summer. The fourth generation is starting to work there, making coffee, and serving drinks, no privileges.

It is interesting to see the flow of customers. In winter, the local moms meet for coffee after dropping off the kids at school. After lunch, the old men come down for their card game, in the afternoon groups gather for the tertulia (conversation) and coffee. And in summer nights everybody comes for the barbecue!

The coffee is not particularly good. It is old school Spanish coffee, which means it is torrefacto: over-toasted and with added burnt sugars to boost the flavor and aroma (see my previous post on coffee). But that is exactly what you should expect in an old-fashioned café in a Spanish village. My preppy friends from Madrid hate it, but that is missing the point of the tradition. There is a basic lunch menu, which is handy in emergencies and all day bocadillos -simple sandwiches made with Spanish French-style baguette.

But the real food comes at night when they fire up the barbecue! Outdoors, right in front of the diners. While they will oblige and throw a burger on the grill if you ask them to, the specialty here are the local sausages: chorizo and morcilla. Chorizo is the more familiar as it is spicy pork sausage. Morcilla is the lesser known sibling made of ground pork with its blood, with either onion or rice, what the Brits call “Black sausage” but that is where the similarities end. Morcilla has a strong, tangy but sweet taste. And Marcelino grills the best! The barbecue menu also has pinchos morunos (the Spanish evolution of shish kebabs), and steaks, plus salads and other traditional dishes from the kitchen.

After dinner you can stay until after midnight enjoying a drink. In fact, Marcelino is one of only a handful of bars that serves Xoriguer, a gin made in the Balearic island of Menorca, which happens to be my favorite. But that is a subject for a different post.