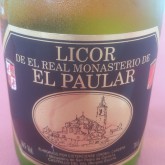 The Benedictine monks have kept the liquor making tradition from the previous Carthusian “tenants” of the Monastery. 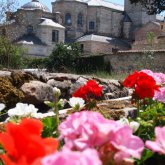 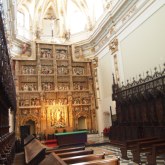 The church with a fantastic Gothic altarpiece 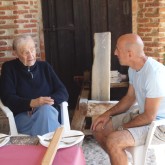 Seeking wisdom from Brother Eulogio before lunch. (Is there a meaning to the massive sharpening stone behind us?) 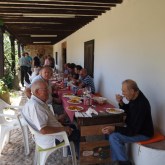 Lunch at the garden

The Monastery from the garden 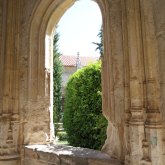 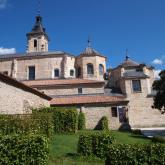 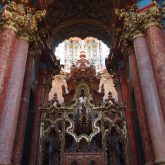 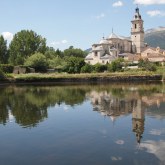 The reservoir for irrigation 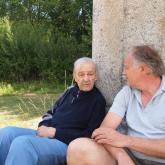 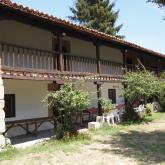 The barn where we had lunch 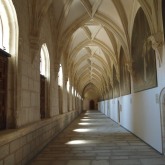 The cloister with the restored Carducho paintings 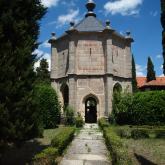 The well in the center of the cloister 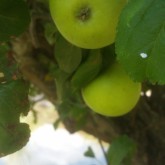 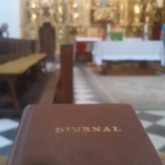 Prayer time in the chapel 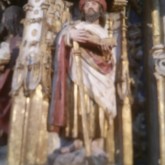 It was nice to be greeted by my old friend St. James so far away from the Camino. 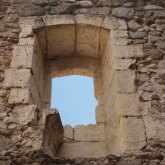 An original window with the seat still visible 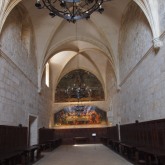 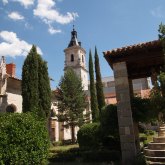 The bell tower from the cloister

(There is a previous post on El Paular. This one is a bit more detailed and touches on different themes, most importantly, spirituality.)

Every trip to El Paular monastery is gift, a spiritual gift.

A few years ago, Jaime, my oldest childhood friend, took me to see what had been his first professional restoration job in the late 80s: the Monasterio de El Paular, nestled in the Guadarrama Mountains. Although many years had passed, he was still friends with the Abbot and with a few of the monks there. The drive was breathtaking; over the Navacerrada pass and down Cotos, not far from where Hemingway had based his novel For Whom the Bell Tolls.

Brother Eulogio is getting old and frail, but his faith, his spirituality is still resolute. After working at the Vespa scooter factory in Madrid, he decided to become a monk at El Paular. He has been there for fifty odd years, since his 20s. We did not know what to expect, he had been in hospital for a stint.

The monastery has a long history dating back to medieval times. Apparently there was a hermit living there before the monastery was built by the Carthusian order in the 1300s. The placement could not be any more beautiful, between a crystalline stream and the mountains, with a huge vegetable garden and orchard. The energy flow, the calm and beauty would not have passed unaccounted for anyone, regardless of the era.

By my calculations, following the geographical clues, the Arcipreste de Hita’s Serranas section of the Libro de Buen Amor should pass by the Monastery, since he mentions Somosierra and Lozoya on his way to Segovia. There could not have been much of a place to pass other than the Monastery.

The first time I went to El Paular, the Abbot treated us to lunch with the brothers in the modern but humble, functional, refectory. The gorgeous original is only used for Christmas dinner, when they have many guests. It was then that I met brother Eulogio for the first time. I remember vividly his first question: “Do you have faith?” To which I mumbled/chuckled something to the effect of “I’m working on it”. Then he went off on a tirade on the state of modern faith, his thin, strong frame acting as an exclamation mark for his statements.

In 1779 Enlightenment writer Gaspar Melchor de Jovellanos stayed at the Monastery for a retreat/convalescence writing what scholars consider the seed of Spanish Romantic poetry, the Epístola del Paular, which you can find at the end of the post…

After lunch Eulogio took Jaime and I for a walk on the huge fruit and vegetable garden. It is so big that they have hired a company to run and sell their produce, but only after the monks take what they need. During the walk, Eulogio referred repeatedly to feelings I had that needed answers to, he hit the spot on the need and importance of a “higher presence” in our lives – subtly connecting this need to the beauty around us. Eulogio looks like a closet Franciscan. From that visit, and that conversation I have always wanted to return to El Paular to continue my conversations with Eulogio. So every time Jaime mentions a visit, I jump at the opportunity.

The Church in Spain had so much power that for centuries it rivaled the government in its sway of the citizens. So in the 1800s Prime Minister Mendizabal took over and sold many, if not most of the Church’s properties, El Paular was abandoned, the massive Vicente Carducho paintings lining the cloister walls were grabbed by museums and collectors looking out for Mendizábal’s garage sales.

For years Eulogio’s job at the Monastery had been to handle the weddings that took place in the church. Only a couple of hours North of Madrid, it is an idyllic setting for a romantic wedding. However, Eulogio does not fit into the “cute” monk idea popularized by Hollywood. He would question the couples on their love, their reasons for marriage, their commitment.

During the Civil War, 1936 to 1939 the abandoned monastery served as a makeshift military barracks for troops. The graffiti left there was not painted over during the restoration process as it gives further historical context to the Monastery.

Last year we also made the drive to visit Eulogio, but we did not stay for lunch, as we wanted to ride and hike to explore the mountains surrounding the Monastery.

After the Civil War, General Franco, seeking to restore the Monastery, brought in some Benedictine monks who continue to this day. In the late 70s the government built a luxury hotel next door to the Monastery, profiting from the ideal location, the tourist influx, and the weddings that were held in the beautiful church of the Monastery. After changing hands a number of times between luxury hotel operators, it now rests abandoned.

My thirst for Eulogio’s spiritual wisdom comes from my realization in 2010 of the powerful inter-connectedness of the universe, of which we are as much a part of as a blade of grass, as a distant star. But to get to that point one must let go of the ego, of that which we think we are, and simply be. Easier said than done. Richard Rohr explains it in the context of the ancient Greek word of self-emptying: “kenosis, an emptying out of the contents of awareness so that one becomes oneself an empty vessel, a broken vessel, a void that lies open before God and finds itself filled with God’s own life. This gift of God is revealed to be the ground and root of our very existence. It is our own true self.”

This, of course, is not a new concept, it is embraced by Buddhism and Hinduism, and by early Christianity. 18th Century philosopher Kierkegaard wrote about the Three Stages of Life: the Aesthetic when our lives are dominated by the ego necessary to gain independence from our parents and establish ourselves in the world, everything is superficial. The Ethical where we concern ourselves with what is right and what is wrong, and finally – if we are lucky – and only through a process of “breaking” does one reach the Religious Stage where one realizes that our lives are a part of a much bigger, interconnected picture. Unfortunately for many people, they do not overcome the Aesthetic stage, refusing to release the ego and embrace the universe, the oneness.

This summer, Jaime and I made our pilgrimage to El Paular only a few days after I had finished my own Pilgrimage of The Camino de Santiago (see earlier posts) so I was primed and ready for conversing with Eulogio. He did not disappoint. As soon as we arrived, the Abbot invited us to stay for lunch in the garden. We had plenty of time to walk around the monastery and the garden and talk. And talk we did, about the importance of prayer, of meditation, of being in the presence of God, of a higher power, an energy.

After mid-day prayers at the chapel we headed for the garden where a wonderful meal awaited. I sat next to Eulogio and enjoyed his wisdom, wisecracks and complaints about the food!

El Paular does host visitors that want to spend time with the monks in retreat, so I am considering spending some time with them next time I am in Spain.