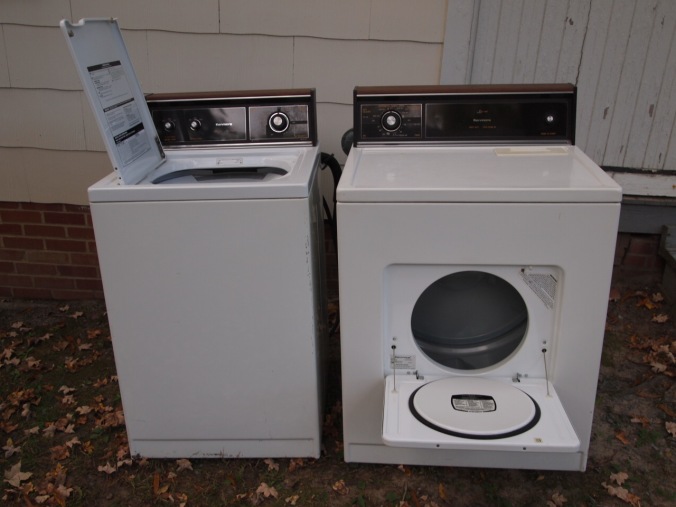 The washer and dryer on their way out

Everybody I tell this story to tells me to write about it. So here it is:

When I first moved to my little cottage in Chapel Hill it lacked a washer and a dryer, although there is a perfect nook for them in the kitchen, there are no electric, water or drain installations for them. After watching Craigslist like a hawk I found both units from an older lady who was moving to Florida. Helmut could only carry one machine at a time, but eventually, they were both home.  Updating and hooking up the electrics, water and drain and air exhaust was going to cost well over a thousand dollars, which of course was much more than I wanted to spend. As was to be expected, the landlord wanted nothing to do with all this.

Smoking a cigar with the boys that were my neighbors, I mentioned this. Lo and behold they had all the necessary hookups in their basement but without the machines! and the basement had an outside door. We quickly realized that if I put my machines in their basement, and put a lock on the outside door we could all do our laundry, it was a win/win for all, and so we did.

This set up continued my second year here. The new neighbors were a great group of girls, including the daughter of one of my department’s professors!

But this year, the house changed ownership, management company and tenants, with the new girls being a group of sorority princesses. They wanted nothing to do with our standing set-up, nor with the machines! They had the landlord install new ones. Pleading with the management company led to nothing, I had to take my units out of their basement and sell them.

Fortunately I found a good home for them in the house of a friend’s newly married son.

So now I have to go to the laundromat.

Recently, a new home “stuff” shop  opened next door to the laundromat. The other day I stopped in to kill some time. Sally, the owner, is the funniest lady! Within minutes of walking in she was playing Andrés Segovia in the shop and we were sipping an extraordinary tequila, apparently made by George Clooney! A friend of Sally’s then walked in… and he is interested in Spanish tutoring. Next thing you know I have a new tutoring customer. Which goes to prove that every cloud has a silver lining.

One thought on “Washer and dryer. Or how every cloud has a silver lining.”