As promised, I am going to post my essays and whatever work I have from school. I am posting things AS IS meaning no corrections (yuck) this will: a, avoid me going through all my work correcting it and b, give you a raw feeling, a work in progress view, a behind the curtains peek. Here is my first writing from this year a critique of a film journal. Enjoy…

Founded by the University of Texas at Austin in 1959, a milestone year for film¹, Cinema Journal, published quarterly, is sponsored by the Society for Cinema and Media Studies, the largest professional organization of moving image media scholars. It includes faculty and students from various fields of Film, Television, and Media, from the US and 39 other countries.¹ Promoting all areas of media studies within universities, encouraging and rewarding excellence in scholarship and writing, and facilitating and improving the teaching of media studies as disciplines and to advance multi-cultural awareness and interaction² SCMS has a wide reaching mission statement that is reflected in the Journal’s content. In our research we studied three consecutive issues of Film Journal: Spring, Summer, and Fall 2011, specifically analyzing methodologies, theoretical approaches, and type of themes favored.

Since publication is limited to SCMS members, the journal is guaranteed its scholarly quality as is evidenced by their 15 percent acceptance rate. Since Cinema Journal is open to all areas of humanities-oriented scholarship in media studies, not only is the quality of the content consistently formal, it also encompasses a wide spectrum of themes and methodologies.

The first and most obvious element evidenced by the reader is the rigorous and varied level of the work, including film, television, radio, sound and digital media. The academic craftsmanship and attention to detail entice the reader to explore each theme and issue. A variety of techniques is applied to this goal, such as comparative film analysis for example of “Esfir Shub’s late 1920s compilation documentaries and Santiago Alvarez’s early 1970s chronicle films”³. As was mentioned earlier, with the ambitious goal of promoting all areas of media studies, the Journal combines seamlessly film history: “The Benshi Track: Mizoguchi Kenji’s The Downfall of Osen and the Sound Transition” to “Audiovisual Change: Viral Web Media and the Obama Campaign”, international film: “Localized Globalization and a Monster National: The Host and the South Korean Film Industry” or, “Landscapes of Expression: Affective Encounters in South Indian Cinema” as well as technology issues “Out of the Screen and into the Theatre: 3-D Film as Demo”, or industry analyses: “There’s More Than One Way to Lose Your Heart”: The American Film Industry, Early Teen Slasher Films and Female Youth”. We found that Cinema Journal covers topics some publications might shun, for example queer fiction such as Nicole Seymour’s “It’s Just Not Turning Up”: Cinematic Vision and Environmental Justice in Todd Haynes’s Safe”, or Feminist and Psychoanalytic Film Theory in “Film Experience and the Formation of Illusion: The Spectator as “Surrogate Body” for the Cinema” by Christiane Voss. Besides the feature articles, Film Journal includes conference reports, “In Focus” special sections on topics such as “The Long Shadows of 9/11: Science Fiction, Thrillers and the War on Terror” or “Teaching Television in a Postnetwork Era”, with detailed book reviews on Teaching Television. Finally each issue includes interviews, special articles on teaching “Teaching our Research…and Researching Our Teaching”, in depth studies, Comic Studies receives a full 41 pages, even obituaries.

As a “senior” publication in the field of Film Studies, Cinema Journal provides a rich, in-depth, and multi-disciplined view covering the domain of Film, TV and Media. 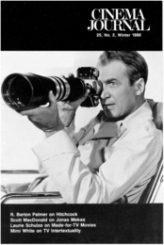