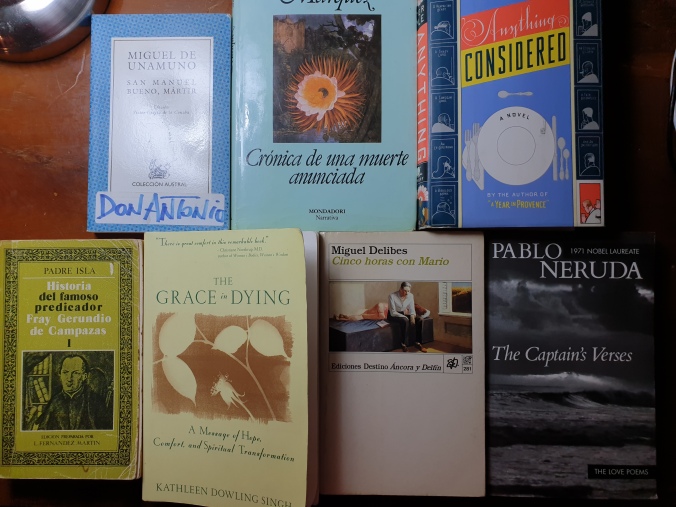 Some of the books I had lying around

Locked up at home during the Coronavirus quarantine, I get to read a lot, which got me thinking of books This blog exists because of books. You see, I started this blog to report my Harley-Davidson trip visiting universities across the South for my PhD in Spanish Literature, that is: books. Yes, I am addicted to books. Having said that, I am a slow reader. So, while I enjoy books, I do not devour books like some folks do. Anyway let’s start at the beginning:

My first blurry memories of reading are of Enid Blyton, I guess like millions of children. Fortunately in high school, I had the privilege of being taught by Mrs. Soledad Sprackling. And my mind exploded with what she had me read: Borges, Neruda, Lorca, et al. That was it, I was hooked. In college my super cultured friend Silvia Velez introduced me to Gabriel García Márquez and my mind exploded again! It has been a series of explosions since.

Luckily I can read in Spanish, English and French and find it very frustrating when I cannot read every book in the original language it was written in. In fact, when I was twirling about with the idea of getting my PhD, I wanted to study comparative lit Spanish / Russian, but there was no way I was going to learn that level of Russian in a hurry, so that was the end of that thought. Miguel de Unamuno, one of my literary heroes actually learnt Danish so he could read Kierkegaard, bastard.

Here is a list of some of my favorite books with only number 1 in a clear position – all the rest vary according to the day you ask me:

Of course, there are many, many more, but I don’t want to bore you, dear reader, any more.

Interestingly, my last read was. The Grace in Dying by Kathleen Dowling Singh which was recommended to me (like so many more) by my dear friend Patxi. It is about the spiritual journey of death, and how the best approach to death is meditation. I started reading it before the massive Covid outbreak and it has helped me digest the numbers in the news. I loved it. My next read, to celebrate the centenary of Benito Perez Galdos’ death will be Trafalgar, about the battle of the same name, not the square in London.

There you have it, some thoughts on reading and my some of my favorite books. Which are yours? What do you recommend? Tell me in the comments!! 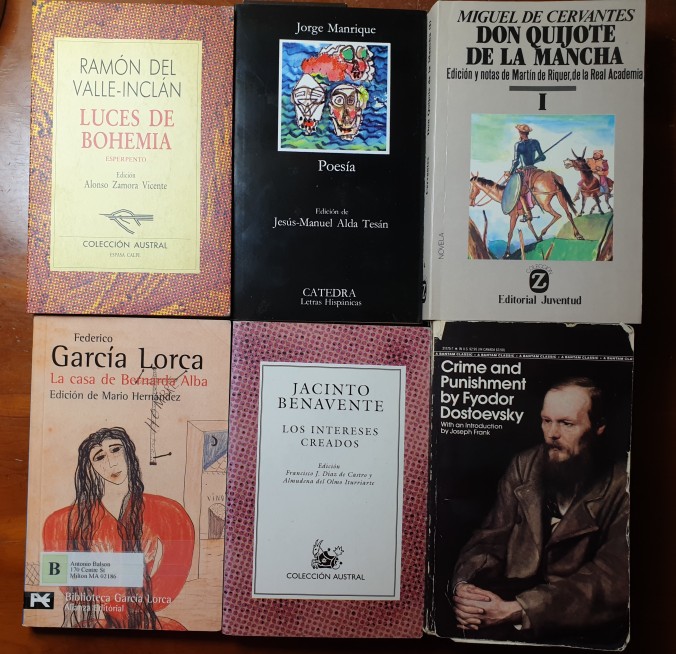 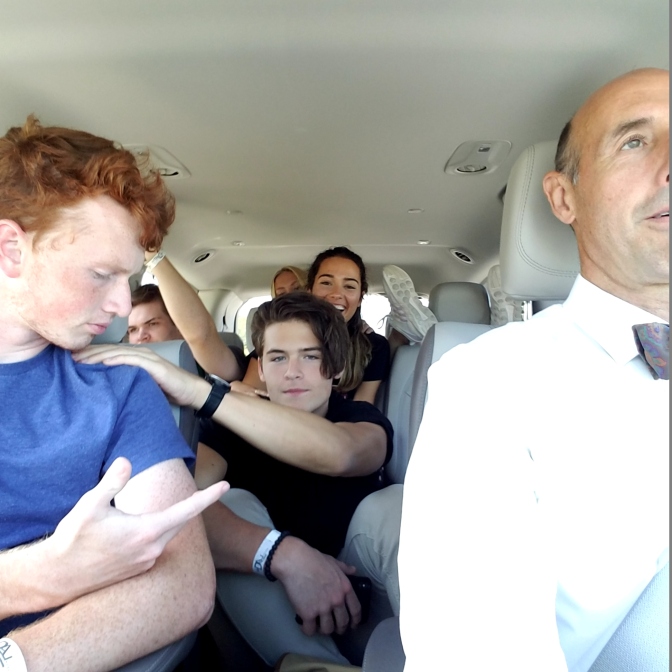 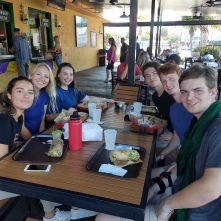 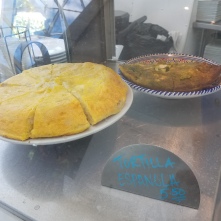 The café at the museum had tortilla!! 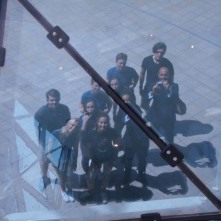 Reflection on the museum wall 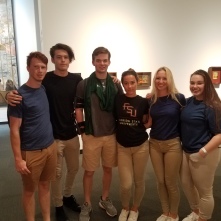 Proud of my students 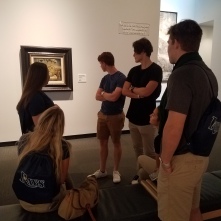 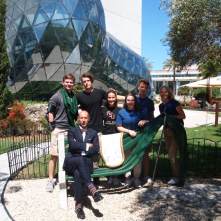 I tried my best Dalí pose 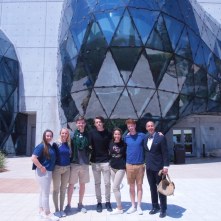 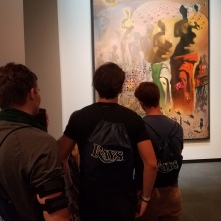 The Hallucinogenic Toreador 1970 Oil on canvas 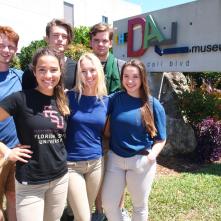 The biggest collectors of Dalí where Reynolds and Eleanor Morse, who founded the Dalí Museum in St. Petersburg – the one in Florida, not the original one. My Spanish V class went on a field trip to visit it.

This year in  Spanish V we studied early 20th Century Peninsular literature and culture. It was an exciting course: we started with late 19th C. Naturalism, reading Emila Pardo Bazán’s short stories, and moved on to Miguel de Unamuno’s San Manuel Bueno, mártir, a proto existentialist text. (To read more about Unamuno and Existentialism see my previous post about Existentialism and the Quijote), we saw Buñuel’s Un Chien Andalou, while studying and reading about Surrealism. We read Federico Garcia Lorca’s poetry  and talked about the Second Spanish Republic and how that led to the Spanish Civil War.

Our visit to St. Petersburg was fun. We took a van for the two hour drive North (with the obligatory stop at Starbucks to start the road trip). Once there, the Museum had our visit very well prepared. We explored the galleries and the students each presented on a work they had studied and talked a bit about Dalí. Outside the museum we walked around the gardens and labyrinth. From there we went a couple of blocks to hip, thriving, Central Ave in Downtown St. Pete, where the students  ordered their lunch – in Spanish – at Red Mesa Mercado, a street side taquería. While the students enjoyed some free time to explore the area, I enjoyed a nice coffee, then we drove back to Seacrest.

The trip was a cultural and pedagogical success, we all learned about Dalí and discovered a little bit of wonderful St. Petersburg – the one in Florida, not the original one. 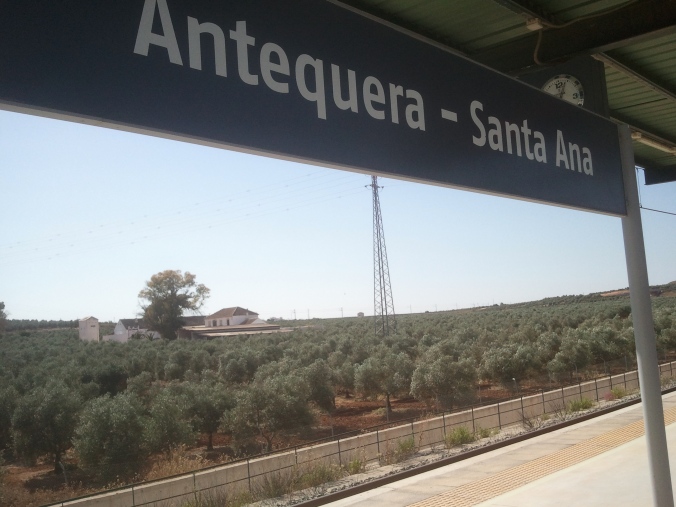 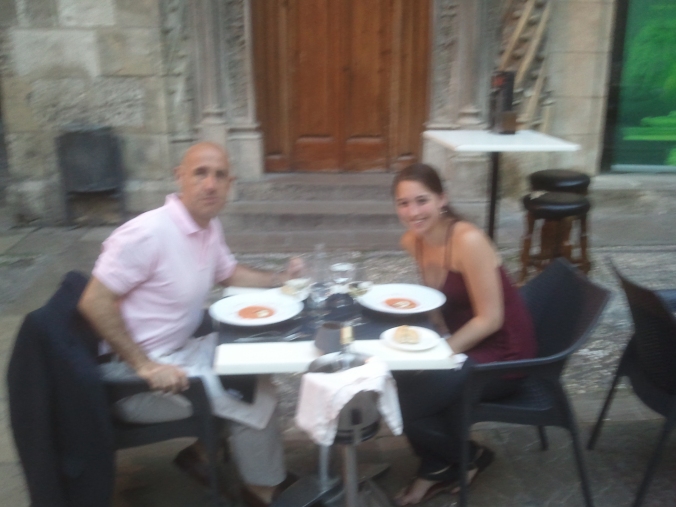 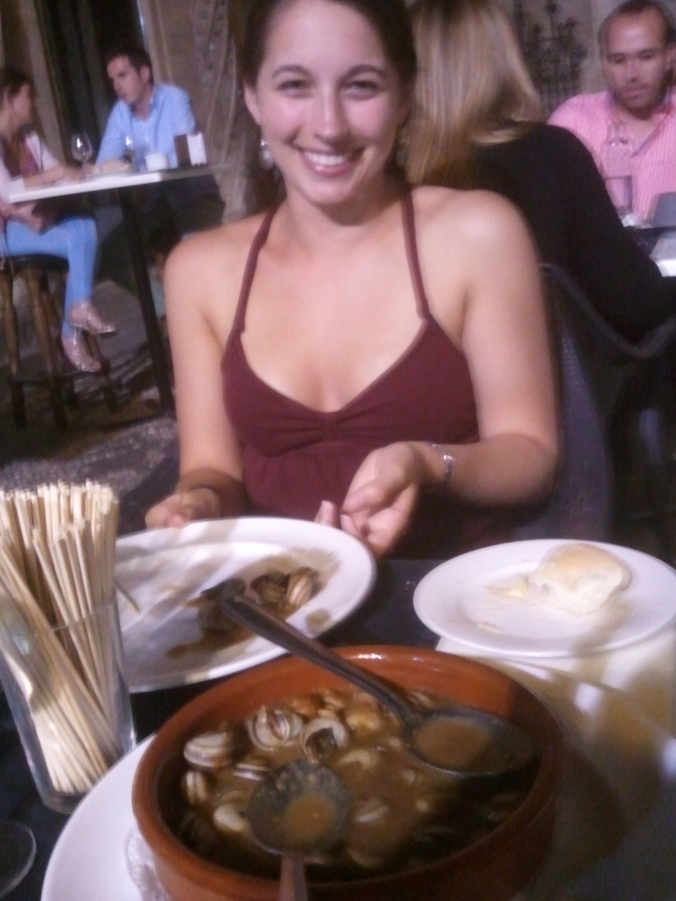 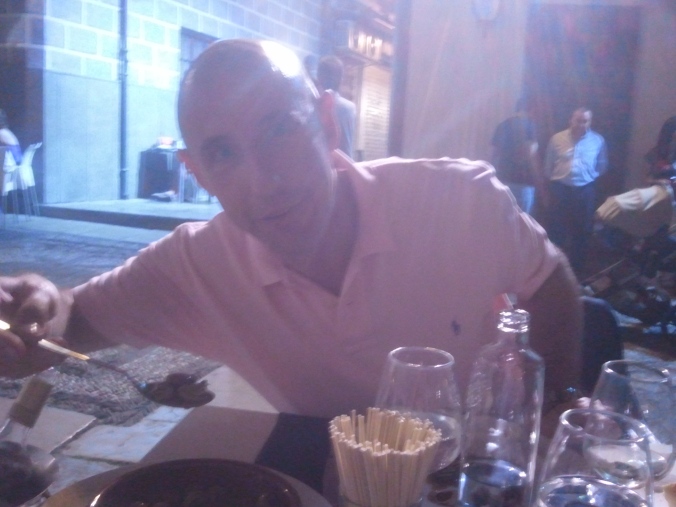 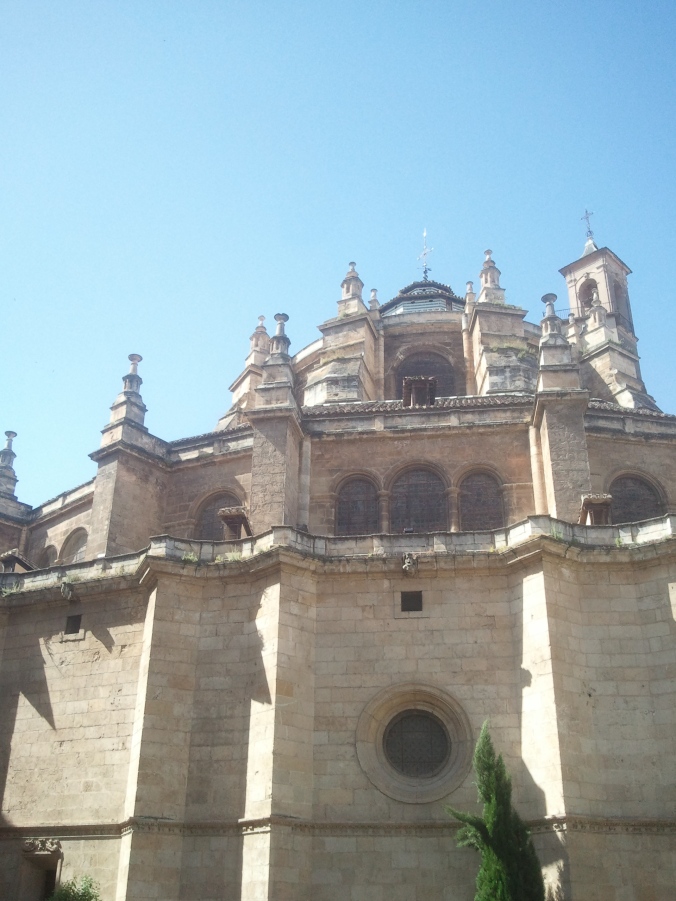 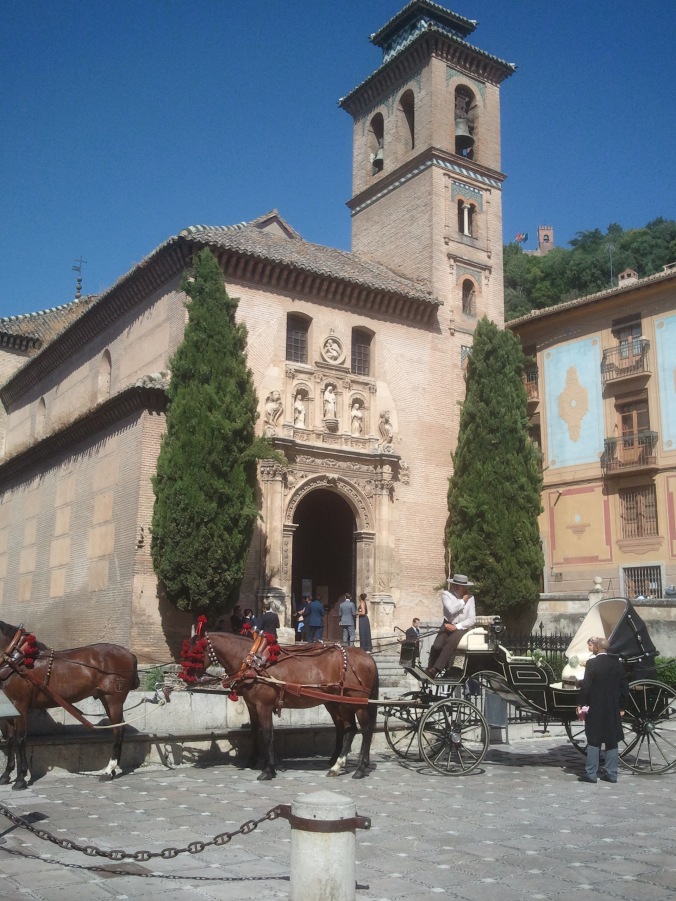 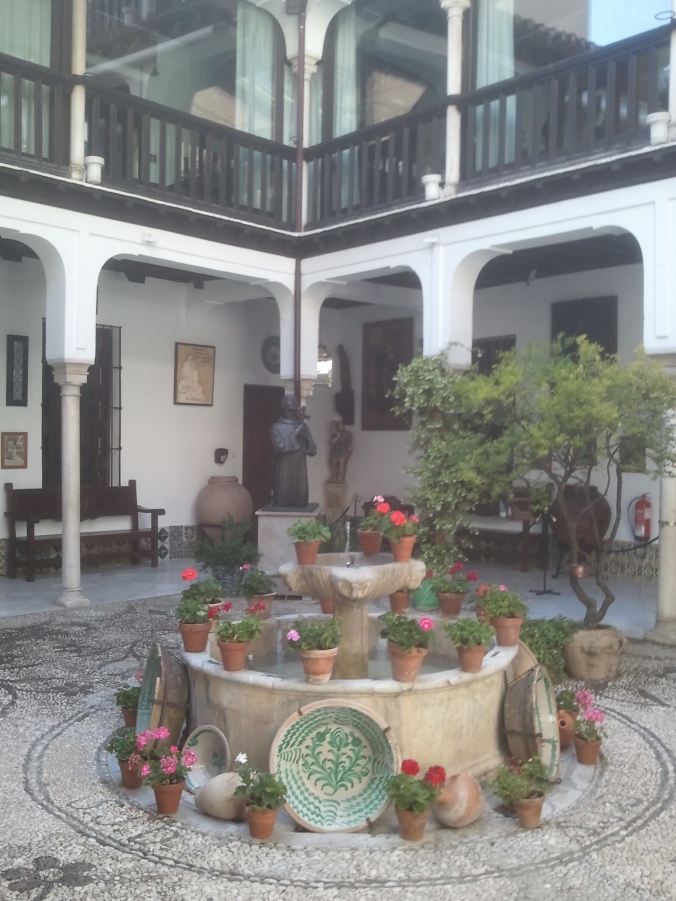 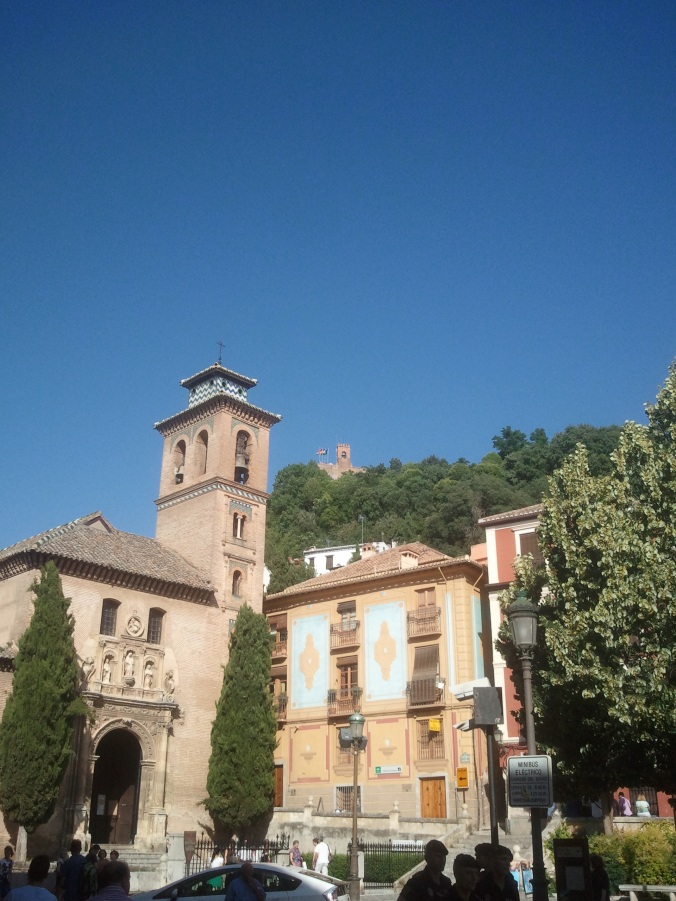 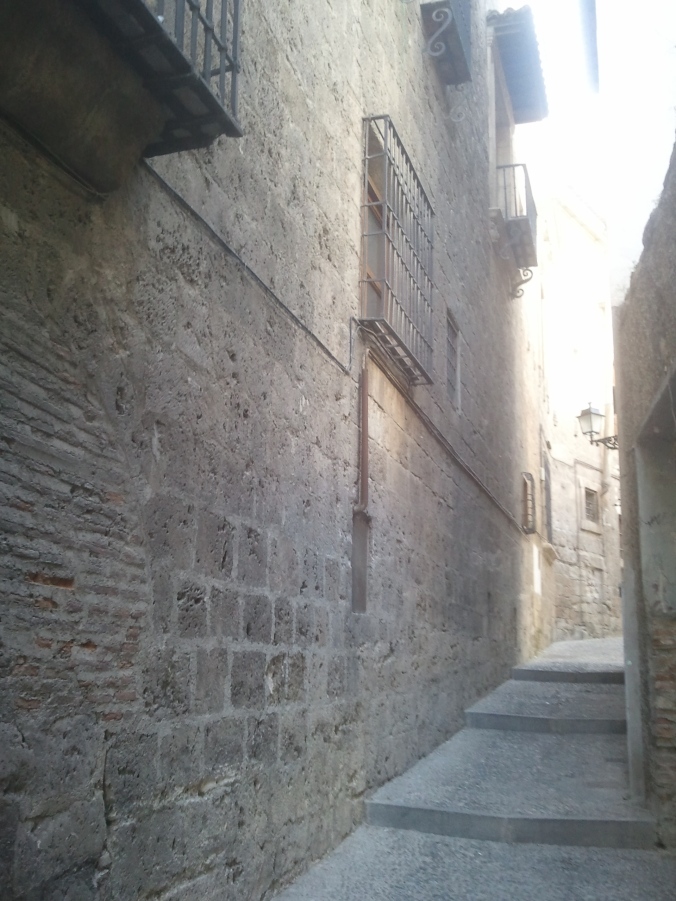 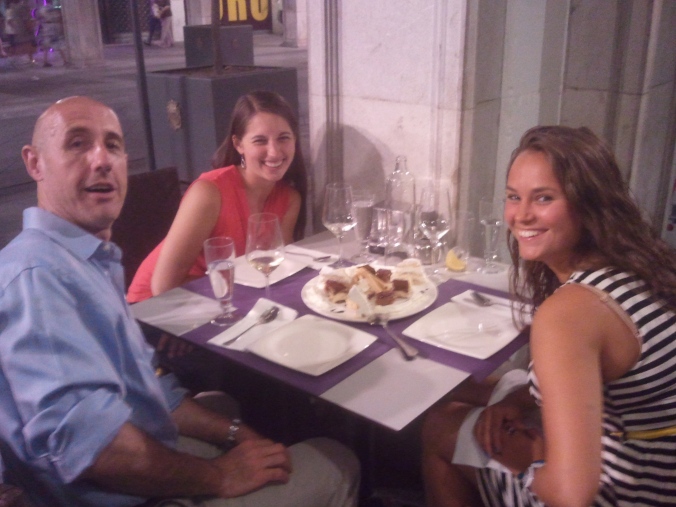 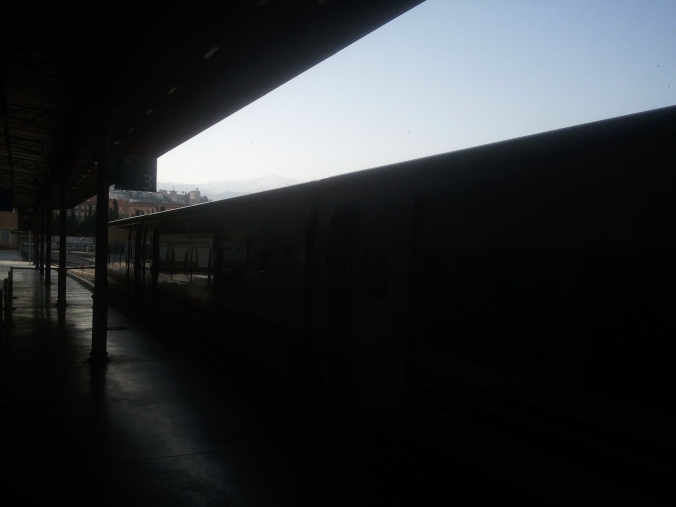 Sierra Nevada in the back

The last time I jumped on a train in Spain for some alone time was in 2010. A lot has happened since and I needed some time to be alone and enjoy this beautiful country. So I booked train tickets and I set off to Granada, the enchanted Moorish city of the South, home of Federico García Lorca, final resting place of Ferdinand and Isabel, inspiration for Washington Irving´s Tales of the Alhambra, and home to Europe´s Southernmost ski station, Sierra Nevada.

Some of the more noticeable changes in Spain in the last twenty years have been in infrastructure: Highways and railroads. Long gone are those creaky, smelly, shaking, trains, replaced by smooth, clean, and fast ones. The award winning Talgo technology – whereby the train “swings” in the turns allowing for a speedier, smoother ride now run on the high speed train rails. While not technically high speed, they do run quite fast. Making the Madrid to Granada trip in four hours where before eight would have been normal!

I love trains. I love enjoying the view while reading, listening to music or enjoying a nice cup of coffee. I love seeing the changes in the countryside as we speed along: now vines, now olive trees, now hills and rocky ridges. Tired and lazy I jumped into a cab for the five minute ride to the hotel. Right downtown, next to the beautiful Renaissance cathedral and the old Moorish town. The hotel, a 1920’s tile covered building has an old indoor patio.

I met up for dinner with Catherine Keller, a dear old student from my Walnut Hill days who is spending her summer in Granada with her Fordham University program. We went to the classic old Café Sevilla where we enjoyed great tapas and raciones – sharing plates. Including salmorejo (a concentrated type of gazpacho), and caracoles – snails!

Saturday morning, after a fabulous breakfast at the hotel, I hit the used book stores in the old part of town, and… Bingo! I found a trove of books that I needed for my reading list for my Ph.D. exam next Spring. The morning flew by while my bag grew heavier with books. Lunch was – as it should be – a leisurely affair, including, after coffee, a nice cigar and a Tanqueray Tonic while I continued reading my dear Fray Gerundioˡ. After a siesta it was time for vespers, as I knew I would not have time for mass on Sunday. I showed up at the beautiful Santa Ana church a while before mass, only to find that a wedding was finishing. It was all very beautiful, they had hired a four horse carriage, and the flowers in the church were delightful.

For dinner I met up with Catherine and Jenny – who I had seen in Madrid a few weeks ago, but was visiting Granada with her Mount Holyoke program from Valencia. So we had a mini Walnut Hill, 2010 Spain trip reunion with a lot of laughs.

Sunday morning, refreshed from my visit to old Granada, and with my bag a few pounds heavier, I jumped on the train back to Madrid.

I fell in love with the place, the people, the program the whole kit and caboodle.

Flashback to Friday, March 23 after attending a couple of very interesting panels at the Conference (“Medieval and Golden Age texts from inside the prison, the convent and the law” and about García Lorca’s Poeta en Nueva York) we all drove to Professor Domínguez´s house for a party. Here in the warmth of his beautiful house, mingling and chatting with professors, graduate students, staff and conference participants the idea crystallized. I found a bunch of grad students in the den watching the final minutes of the Tar Heels beating Ohio and immediately found a spot on the floor and sat down with them. When the buzzer went off and we had won the game, time stopped, everything went silent in my head as people jumped and screamed around me, the ceiling opened and a blinding white light fell upon me and I knew I was going to get my PhD in Spanish Literature at the University of North Carolina at Chapel Hill. (No I was not drinking, I had given it up for lent). The rest of the evening is a blur. All I remember is levitating and smiling a lot.

Saturday I still went to a couple of panels at the conference and continued doing homework. Talking to people and checking off all the boxes of the “to do” list in my head. I bumped into someone I had met the night before at the party, Professor Lucia Binotti. She was nice enough to take me to beautiful Caffe Driade, where we had a great coffee. Saturday night was the final banquet where I was received as “one of them” and I loved the company, the conversation and learning about the whole shebang. That was the icing on the cake, the cherry on top.

I came home, signed the papers, wrote a check for my deposit and the adventure begins.

Epilogue: to this day April 17, I have not heard from Georgetown, Emory, Tulane or U. Tennessee, their loss.

Note: Here is the photo album I promised… enjoy!