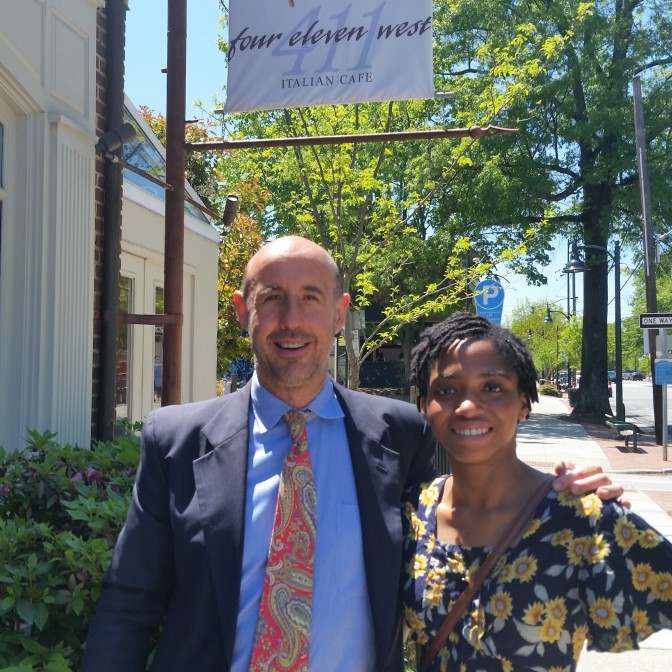 Irene was not only my thesis director, but an awesome mentor.

Dean Minetti was such a great mentor I didn’t even realize he was mentoring me!!

With the great Renaud in the middle of the Black Forest

The moment we learn a skill or acquire any knowledge or wisdom it is our responsibility to share it with those younger than us. Not doing so would be a selfish waste of that skill, knowledge or wisdom. I came about mentoring by the same circuitous and unknown to me way as most things happen in my life.

My college years were incredibly constructive: I wrote a column for the school newspaper, I had the classical music program at the radio station, I was president of the International Club, I was International Student representative to the Student Government, and my senior year I was appointed Student Government representative to the Board of Trustees. I sat next to a sweet old man, who by means of his mystical powers, realized I badly needed some guidance in my life. Thus, unbeknown to me I had my first mentor. Jere Dykema was a quiet, sweet and brilliant lawyer and investment manager in Boston. The fact that he was a trustee at Bentley means he was also well connected and probably rich. After graduation I did an internship at the Societe de Banques Suisses in Geneva, and in September of 1987 I moved to New York hoping to get a job in Wall Street at the same time as the financial markets took one of their biggest hits in history, Black Monday. Somehow Jere Dykema stayed in touch with me throughout – this was before personal computers and the interweb. After eight fruitless, should I say, jobless months in NY, Jere put me in touch with an acquaintance from his squash club in Boston. That acquaintance was Eyk Van Otterloo, and the rest, as they say, is history: he made the mistake of offering me a job, and I moved back to my beloved Boston, where I would regularly meet Jere Dykema for lunch. That is when I realized the importance of mentoring.

After a few years I moved back to Madrid to work for a stockbroker. We soon received a young college graduate from Atlanta on a one year internship. Sure we became good friends to this day, but more importantly I could help him get his professional “sea legs”. From that point on there was always someone I could help out. When I started my company in 1994, one of my biggest responsibilities, but also pleasures was training, coaching and mentoring my team, I loved it. Becoming a teacher in the US also meant automatically becoming a mentor. Advising students is a great way of putting my 20 plus years of business experience and my 50 (soon plus) years of life experience to good use.

In the photofinishing industry I was again lucky to find wonderful advisors. Although Renaud lived in Paris, he still helped and advised me, and made sure I was ok. I loved working with him and knowing that he always had my best interest in mind.

Back in the States, strangely enough, an old university professor became my mentor. Twenty years after teaching me, and having stayed in contact all these years, Prof. Nurick and his wife Diane became friends, advisors, mentors. I still remember conversations and advice they gave me. Being a Tar Heel himself, Aaron Nurick wrote a letter of recommendation for me to UNC, I don’t know what sort of lies he wrote, but it worked, they accepted me!

At UNC, other than with my students, I had a couple of great mentoring opportunities. We had the chance of guiding the graduate students that came into the department after us. My first year I had the best possible mentor. Grant Gearhart took me out on nice long bicycle rides where he patiently explained the ropes of graduate school to me. As expected we became close friends. Starting my second year it was my turn to help an incoming student. The Newman Church also had a mentoring program, so I also got involved with that. I was paired with Mauricio and Simdi, they were both great. We would meet for a meal, mostly sushi at Akai Hana, my favorite place in Chapel Hill (actually Carrboro). Mauri graduated and Simdi and I continued our tradition of meeting for great meals and chats.

Part of the beauty of mentoring is that there are as many different styles of mentoring, as there are mentors. Some mentors are so subtle you do not realize you have been mentored until after the fact. This was the case with Dean Minetti who was such a presence during my college years, but I did not understand how he had helped me out until much later. Other cases might be more obvious, which was the case with my father.

As I am about to post this, I am happy to report that my new school, Seacrest Country Day School has a faculty mentoring program, and I am thrilled to have the awesome Patrick Duffy as my mentor.

I hope my help and guidance advice have been of some use to those I have shared them with over the years. I can’t wait to continue helping those younger than I.

One thought on “On the importance of mentoring”